Since this week's 52 Ancestors theme is "Large Family," it is a good time to write about my 2nd-great-grandmother Sarah Claire "Sadie" Dyer, who was the mother of ten children.

Sadie was born in Nashville, Tennessee on 8 October 1863. She was the second child of Mary and Michael Dyer. Her older sister, Mary E. "Mollie" Dyer, was born about 1860. Mollie and Sadie had a younger brother, Michael J. Dyer, who was born about 1868.

Sadie's parents had a troubled marriage. Her father physically abused her mother. When Sadie was six and a half years old, her father committed suicide by shooting himself in the head. 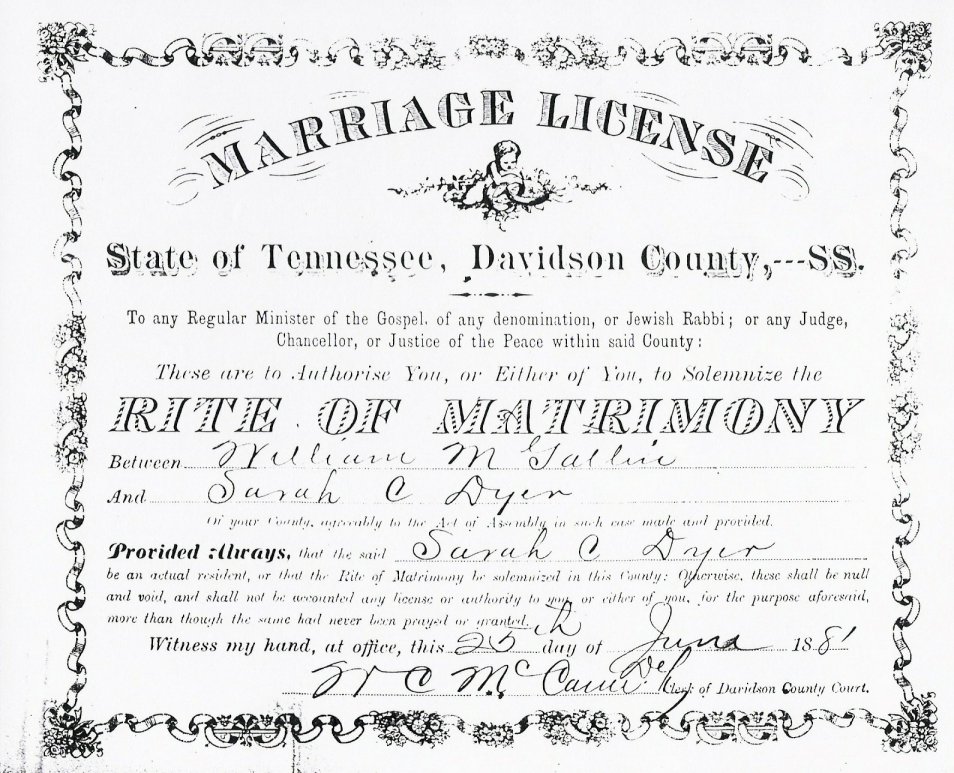 William and Sadie were the parents of ten children:

Anna Elizabeth Gatlin (born 3 December 1890): She may have been named after Sadie's half-sister Annie Cox.

Bruce E. Gatlin (born 26 December 1900): He was probably named after Andrew Marshall, who was one of the founders of Marshall & Bruce (William's longtime employer).

Marshall J. Gatlin (born 24 June 1903): He was probably named after J. H. Bruce, who was one of the founders of Marshall & Bruce (William's longtime employer).

Sadie's son Henry and his wife had moved to Chicago, Illinois by 1910. William and Sadie and most of their children followed them there shortly afterward. Florence and her husband were living in Bloomington, Indiana, and William D. was in the Southern Illinois Penitentiary. Most of Sadie's siblings had passed away by the time that the family left Nashville  (Michael in 1895, William in 1896, Annie in 1898, Mollie in 1902, and Tom in 1905 (he committed suicide to escape execution for killing a police officer). William's father died in 1911. They may have wanted to make a fresh start elsewhere and be near their grandson Henry Cornelius Gatlin (my paternal grandfather.)

My grandfather was raised Catholic. I don't think his mother was Catholic before her marriage, and his father, who had bigamously married his mother, does not seem the religious type. I suspect that Sadie may have insisted that her grandson be raised Catholic; she was from a Catholic family.

When Sadie's son Henry filed for divorce from his first wife, Sadie testified in court on his behalf. (She did not mention that he had already remarried and had a son.) 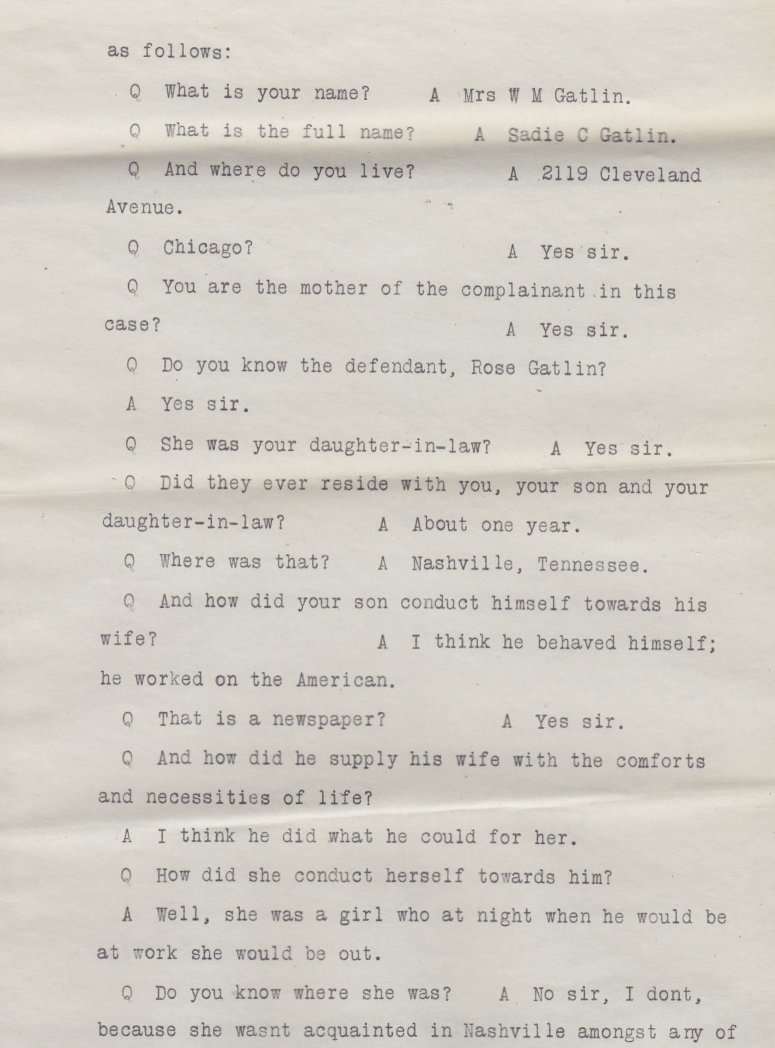 Sadie outlived four of her children. Her son Michael died of bronchopneumonia in 1918. In 1919, her son William was shot by a guard in the Illinois State Prison (Joliet) after he attempted to attack another guard and refused to obey orders. Her son Marshall died of tuberculous peritonitis in 1923. Sadie's husband William died of a cerebral hemorrhage in 1933, and their daughter Florence died of organic heart disease in 1944.

According to the 1940 United States Census, Sadie had completed eighth grade.

Sadie died of myocarditis on 20 January 1945 in St. Joseph's Hospital, Chicago, Illinois. She had also been suffering from arteriosclerosis. Her parents' names were listed as "unknown" on her death certificate (which was very disappointing to me, since I am still searching for her mother's maiden name.) The informant was "hospital records." I wonder why none of her children supplied information. 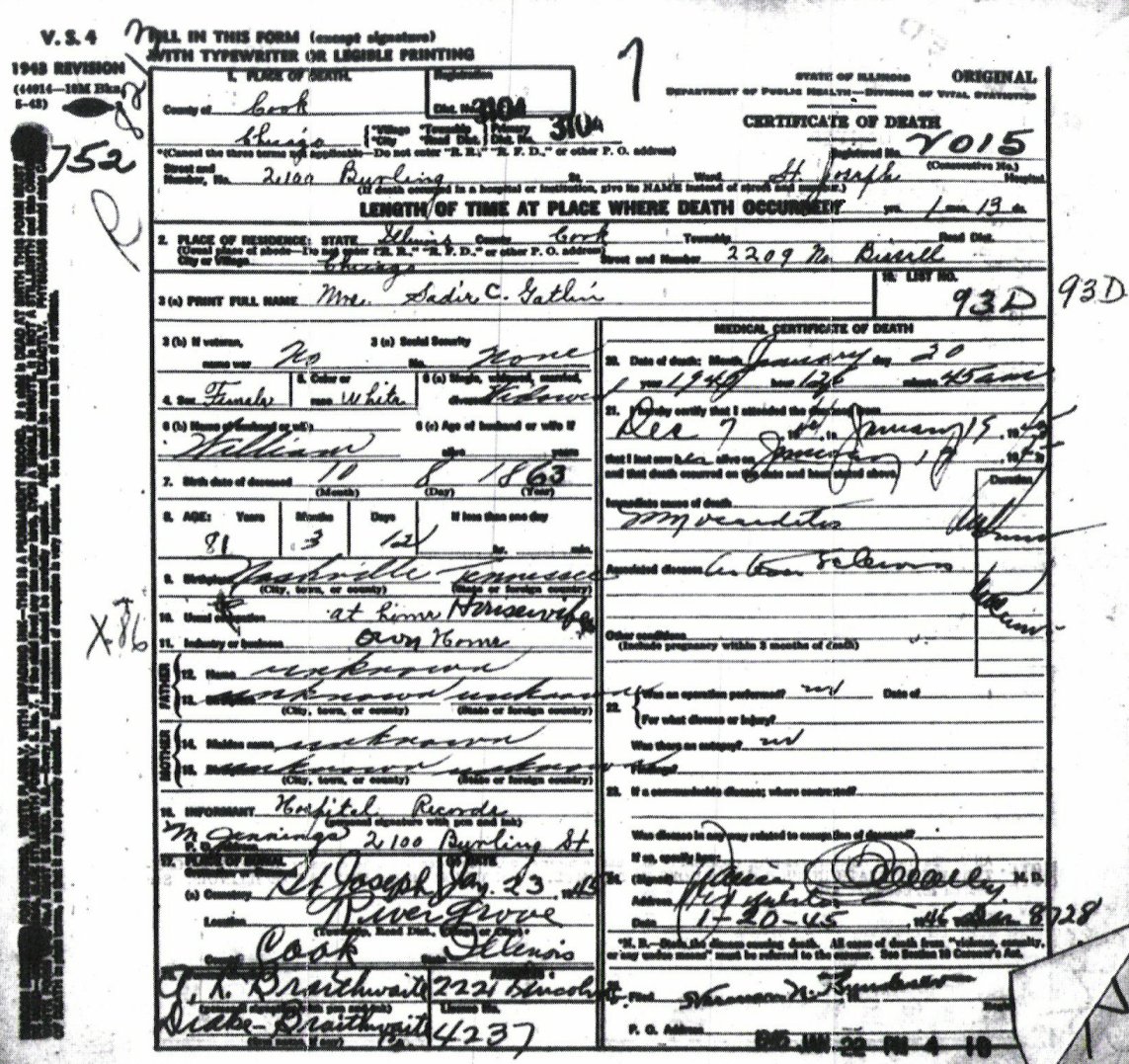