My great-grandfather Henry Brown Gatlin was born on 28 June 1884 in Nashville, Tennessee. He was the second child and the oldest son of John William Morton Gatlin and Sarah Claire "Sadie" Dyer. In 1900, he was working as a bookbinder at Marshall & Bruce, where his father was also a bookbinder. In 1902 he worked as a compositor, and in 1903 he worked as a printer. He had moved to Chicago by 1904, and worked for Hazlitt Printing Co. He returned to Nashville and applied for membership in the International Typographical Union in 1904. On 5 December 1905, he married Rose Kuenninger in Chicago, Illinois. The couple then returned to Nashville. In 1908, he worked as a compositor for The American. That same year, Rose left Henry. Henry married my great-grandmother Anna Gertrude Tarkington in Nashville, Tennessee on 19 November 1909. Henry and Gertrude moved to Chicago shortly after their marriage, and on 10 April 1910, my paternal grandfather Henry Cornelius Gatlin was born.

Henry finally divorced Rose in 1916. He is the one that filed. He had last seen her in Chicago about 1911, when he ran into her with another man and she asked him for a divorce. He made himself out to be the innocent party, abandoned by his wife. No one said anything about him being a bigamist!

Henry continued to work as a printer in Chicago. In 1918, he worked for Excelsior Printing Co. In 1922, he was one of two members of Typographical Union No. 16, Chicago to be on the arbitration board,and the board selected the chairman for wage negotiations.  On 26 June 1923, his son Eugene Joseph Gatlin was stillborn. Henry worked as a foreman for Bowman Publishing Co. in Evanston, Illinois in 1927. By 1929, he was working as a business agent for Typographical Union No. 16, Chicago.

On 29 November 1929, his wife Gertrude filed for divorce. On 26 August 1929, while he was drunk, Henry threatened her life and drove her out of their home. After they separated, he tried to break into her residence to hurt her. She had to get a restraining order against him. The divorce case was eventually dismissed because no one appeared to prosecute the case. However, the couple remained separated, and Henry and his son became estranged.

By 1940, Henry had married Louise Elliott. Louise and Gertrude were distant cousins, although the two women probably never knew it and may not even have known each other. In 1942, Henry worked for the City of Chicago at 402 City Hall. After he retired, Henry and Louise moved to Cary, McHenry County, Illinois. Henry died at St. Joseph Hospital in Elgin, Kane Count, Illinois on 28 February 1954. For the last eleven months of his life, he had bladder cancer. He was buried in St. Joseph Cemetery in Chicago, Illinois on 4 March 1954. 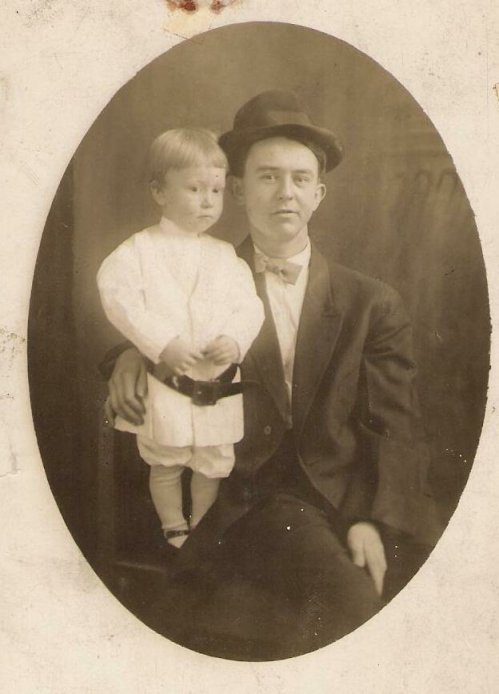 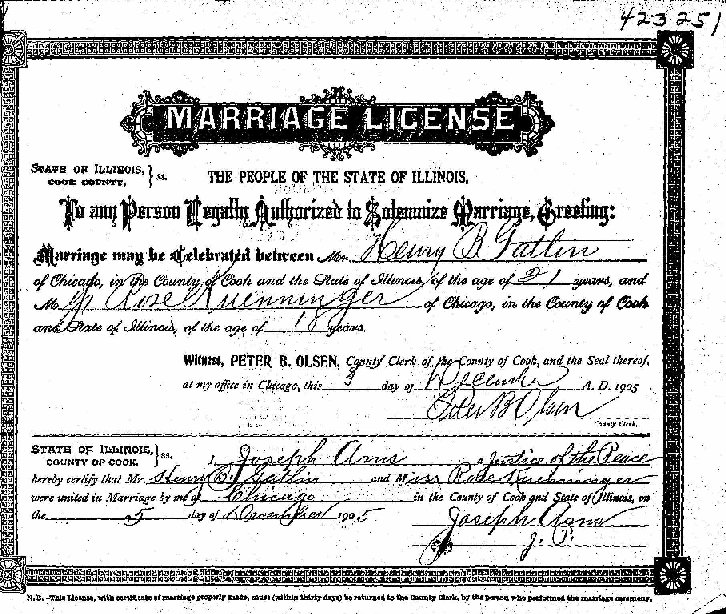 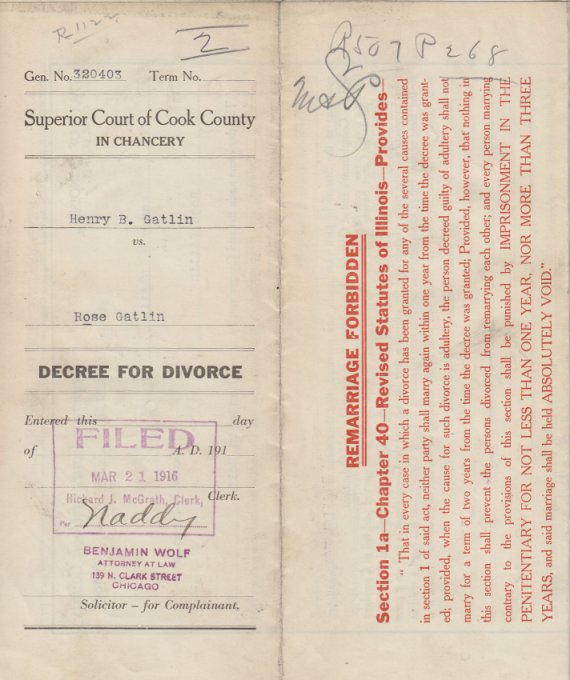 Superior Court of Cook County, Illinois. Decree for Divorce, Henry B. Gatlin vs. Rose Gatlin, filed 21 March 1916. Remarriage was forbidden for one year, but Henry had already remarried before he filed for divorce! 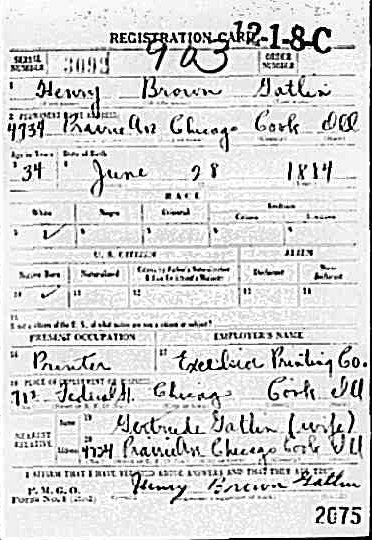 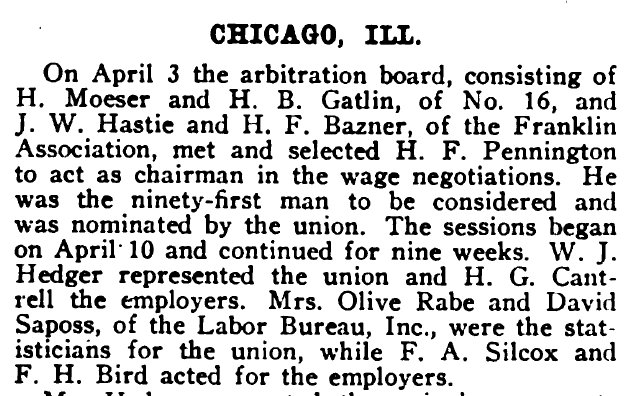 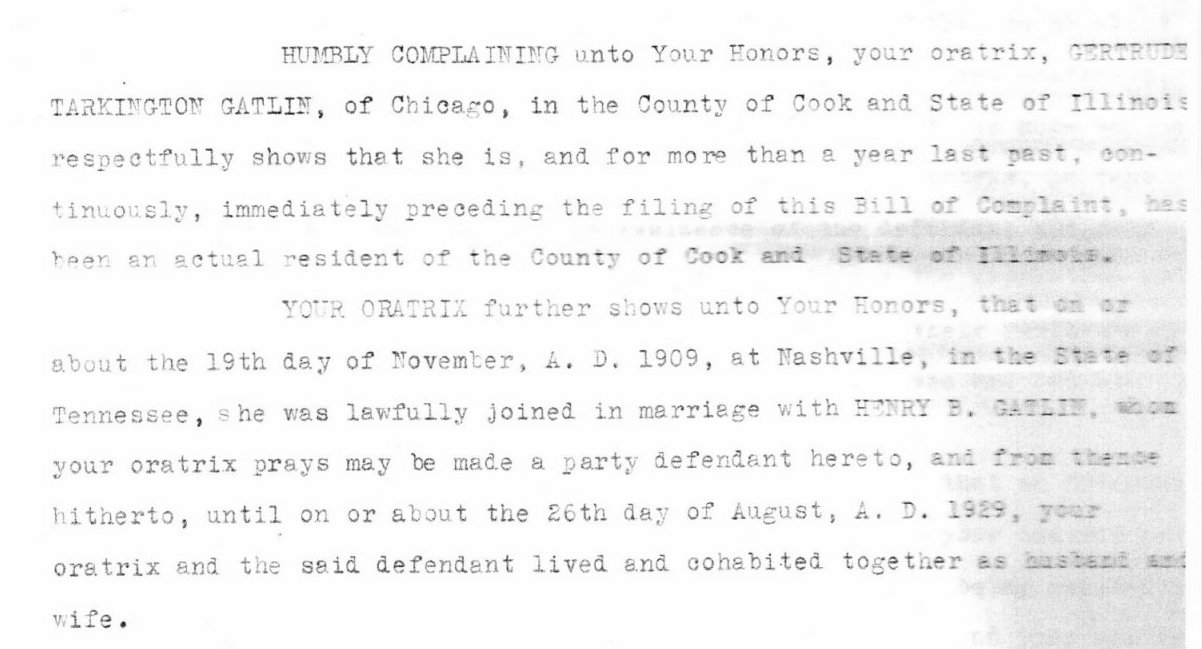 Superior Court of Cook County, Illinois. Bill for Divorce, Gertrude Tarkington Gatlin vs. Henry B. Gatlin, 29 November 1929. This is the only place I have found their marriage date. When I visited the Metropolitan Government Archives in Nashville and tried to find their marriage record, it could not be located. I wonder if Henry never turned in the paperwork to the county because he did not want to risk being caught committing bigamy. 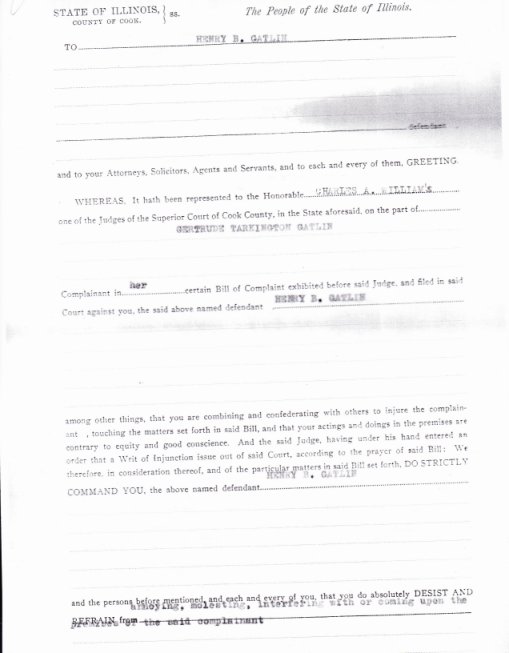 Superior Court of Cook County, Illinois. Injunction writ, Getrude Tarkington Gatlin vs. Henry B. Gatlin. The document stated that Henry was to "DESIST AND REFRAIN from annoying, molesting, interfering with or coming upon the premises of the said complainant." 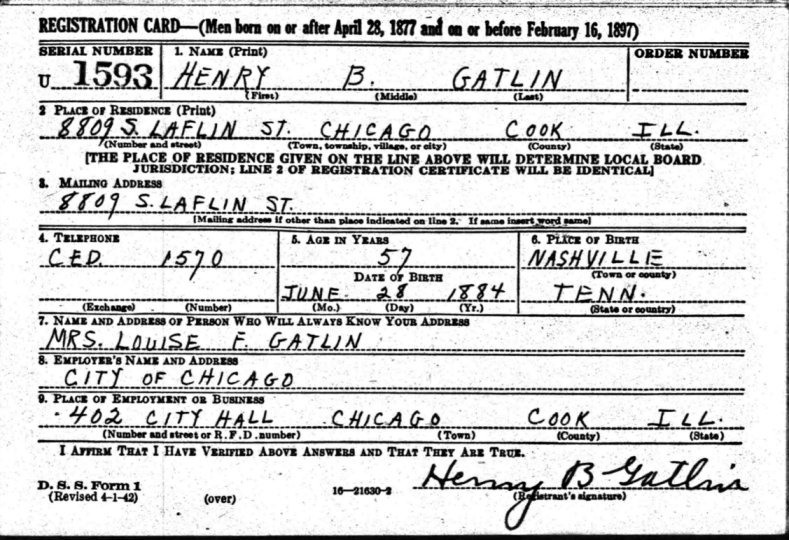