My 4th-great-grandfather Hugh Winters was born about 1810 in Carrickmacross, County Monaghan, Ireland. He married Mary Bennet on 24 January 1831 at St. Mary's Church in Edinburgh, Scotland. He was living in Leith (now part of Edinburgh), but there was no Catholic church in Leith at that time. Their marriage was also recorded at the Church of Scotland in South Leith.

In 1841, Hugh and his family lived at St Andrews St. No 78, South Leith, Midlothian, Scotland. Daniel and Catherine McKensie also lived with the family. Hugh was listed as a "Clothier Broker & Fireman in Dart." Leith was a port city; Hugh probably worked as a fireman on ships. He may have also sold clothes on the docks. The 26 September 1844 issue of the Caledonian Mercury includes a short item about the Leith docks; Hugh may have been one of the "hawkers of ready-made clothes." 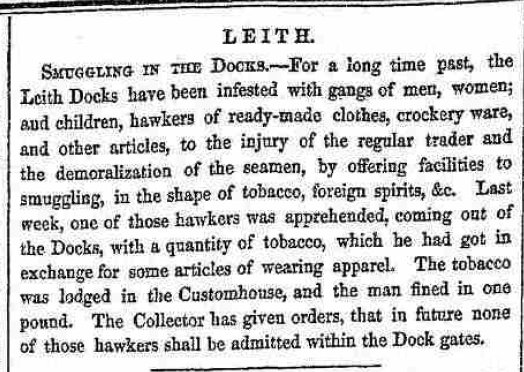 Hugh and Mary's daughter Catherine (or Catharine) was born about 1843.

Hugh became a member of the Repealers of Leith in 1843. John Finnegan, who became a member at the same time, was one of the baptismal sponsors for Hugh's daughter Mary. The Repeal Association had been started by Daniel O'Connell; its goal was the repeal of the 1800 Act of Union between Great Britain and Ireland.

Freeman's Journal, 23 May 1843. Available from British Newspaper Archive. Image © THE BRITISH LIBRARY BOARD. ALL RIGHTS RESERVED.

His wife Mary and daughter Margaret did not sail with them, but they were also in New York by 1850, when the entire family was enumerated in Brooklyn, New York in the 1850 United States census. Hugh and Mary's daughter Elizabeth was born in Brooklyn on 12 January 1851.

Hugh's wife Mary had probably died by 1855. That year, Hugh was a boarder in the home of John and Rosey Moran, and none of his children were living with him. His daughter Mary was a servant in the home of John and Mary Blair, and his son Hugh and daughter Margaret were in the nursery in Flatbush, New York. In 1860, he and his son Hugh lived with Martin and Mary Lyn and two children, Mary and Cath Lee. Mary Winters, age 30, born in Ireland, also lived with them. If this is Hugh's daughter Mary, her age and birthplace are incorrect. She may also have been a new wife or a relative.

In 1865, Hugh lived in at 302 Hicks in Brooklyn with wife Margaret. Also listed in the household were sons Hugh and James, but Hugh was in the navy and James was in the army, so they may have been away from home. If James is the son of Hugh Winters and Mary Bennet, his age is incorrect; he would have been 29, not 21. He could also have been a stepson, which would explain why the younger son, Hugh, was listed first. Hugh worked as a laborer.

In 1866, Hugh testified for the defense at the trial of Eugene J. Fergus. Fergus was charged with the murder of Patrick McGuann. 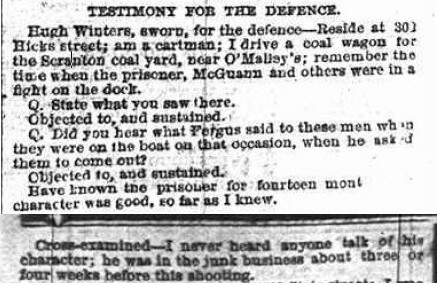 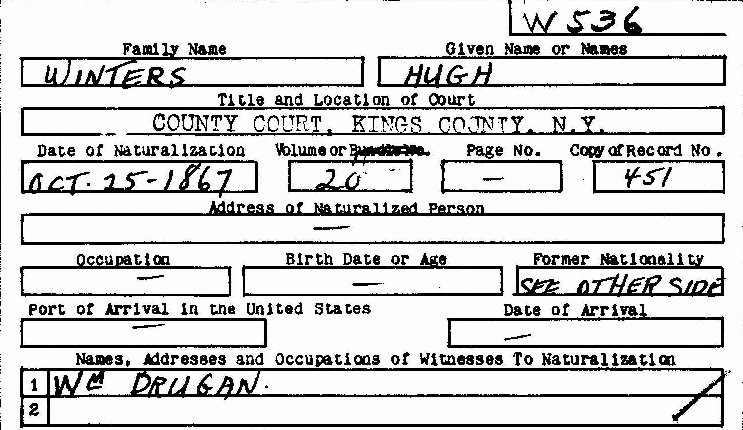 In 1880, Hugh lived at 22 Atlantic Street in Brooklyn, with James and Mary Feenan. He was listed as blind, and was also enumerated in the 1880 Schedules of Defective, Dependent, and Delinquent Classes.

On Christmas Day in 1881, Hugh was admitted to the Kings County Alms House with a sore leg.