My 3rd-great-grandfather John Bennet Winters was born on 19 December 1831 in Leith, Midlothian, Scotland. He was the first child of Hugh Winters and Mary Bennet, who were both born in Ireland. On 8 January 1832, he was baptized at St. Mary's Roman Catholic Cathedral in Edinburgh. Leith did not have a Catholic church at that time. He was baptized by John McPherson, and the sponsors were Owen Winters (probably Hugh Winters' brother) and Bridget McMahon. The Winters family lived in the parish of South Leith until 1849, when they immigrated to the United States. John, his father, and most of his siblings sailed from Glasgow to New York City on the Pursuit; they arrived on 12 June 1849. John's mother and his sister Margaret (the youngest child born in Scotland) did not sail with them, but were with the family in 1850, so apparently they traveled separately. The Winters family settled in Brooklyn, New York. At the time of the 1850 United States Census, John was not employed. By 1859 he had left home and was living in Tonawanda, Erie County, New York, where he married Anna "Ann" Walker on 10 October 1859. The couple was enumerated in Tonawanda in the 1860 United States Census. The record indicates that they had married within the year, which is consistent with the marriage date given in the Winters family Bible. John's occupation was "drudger." He was probably working on the first enlargement of the Erie Canal. John and Ann's first child, daughter Catherine Elizabeth (their only child to survive to adulthood) was born in Tonawanda on 12 November 1861. The family had moved to Chicago, Illinois, by 1866. John ran a grocery store at 247 S. Jefferson, in the Conley's Patch neighborhood. Within two years, three of his children passed away. In 1866, his daughter Alice died at the age of two weeks, and his son Hugh died at age 3 years, 8 months. His son David died in 1867 at the age of three weeks. All three children were buried in a single grave at Graceland Cemetery. In 1871, John petitioned for a free peddler's license. His grocery business had failed, and his only chance of making a living was by peddling tea and coffee. His petition was granted by the mayor and Common Council of Chicago in June 1871. A few months later, after the Great Chicago Fire in October 1871, the Winters family probably had to move. They had lived at the edge of the burnt district, and John was not listed in the 1871 Edwards' Chicago Directory, Fire Edition, which was compiled after the fire. On 19 September 1872, John's wife Ann died. By 1878, John had moved to Montreal, Quebec, Canada, where he married Elizabeth Buise on 18 May 1878 at St. Gabriel Street Presbyterian Church. In the 1878 and 1879 Montreal city directories, John was listed as a watchman. He lived at 24 Bronsdon Lane. John died of pneumonia at Montreal General Hospital on 25 December 1879. He was buried in a common grave in Mount Royal Cemetery on 27 December 1879. Robert Campbell of St. Gabriel Street Presbyterian Church was the minister officiating at his burial. W. S. Wright and R. A. Morrison were witnesses. His burial record stated that his occupation was fireman, which had also been his father's occupation when the family lived in Leith. 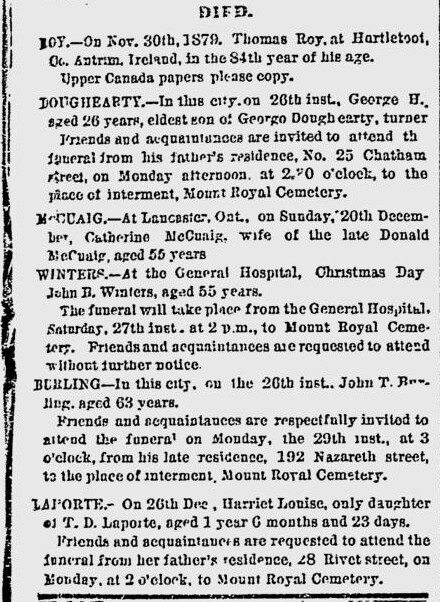