My 3rd-great-grandfather William Dow Gatlin is not the only murderer in my family tree. My great-great-grandmother Sarah Claire "Sadie" Dyer's half-brother Thomas "Tom" Cox also committed murder. Tom was the son of my 3rd-great-grandmother Mary (widow of Michael Dyer) and John Cox. He was born on 6 March 1875 in Nashville, Tennessee. By 1880, Mary Cox was raising seven children alone. In the 1894, 1897, and 1898 Nashville city directories, Tom Cox was listed as a livestock trader.

In 1900, Tom was living with his wife Katie, daughter Annie, and his wife's brother and sister. He had been married for two years, and he was working as a bartender.

On 6 December 1903, Tom shot patrolman Ben F. Dowell at the corner of Lindsley Ave. and Market Street, in front of Grace Cumberland Presbyterian Church, and Ben Dowell died the following day. Prior to the shooting, Ben Dowell had arrested Tom's sister Nellie (Cox) McDonough for disorderly conduct and interfering with an officer. He had been watching the McDonoughs' saloon to see if it was open on a Sunday.

Tom Cox was found guilty of murder in the first degree with mitigating circumstances, and he was sentenced to death. Before he could be executed, he committed suicide on 3 May 1905, by opium and mercurial poisoning. Before he died, a priest administered last rites to him, so he had a Catholic funeral and was buried in Calvary Cemetery in Nashville.

Tom's death certificate states that he was divorced, but I have not yet determined when he and his wife separated. William Gatlin, his brother-in-law (my great-great-grandfather, and husband of Sadie Dyer), was the informant on the death certificate, and the funeral took place from his home. I have wondered how Tom got the opium and mercury; although I have no proof, I wonder if maybe William Gatlin helped him. Tom was going to die anyway, and wanted to do so on his own terms. And if he were executed, he could not have had a Catholic funeral and been buried in a Catholic cemetery.

All of Tom Cox's crimes are described in "Small Chance for Recovery," Nashville Banner, 7 December 1903. 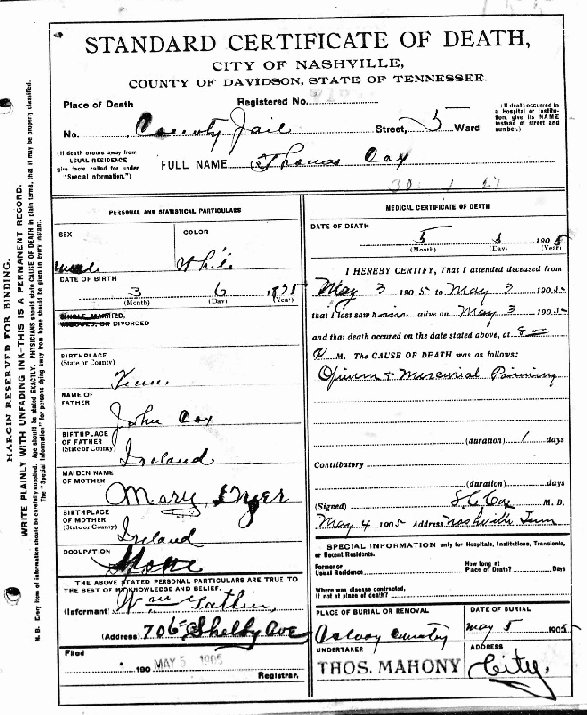