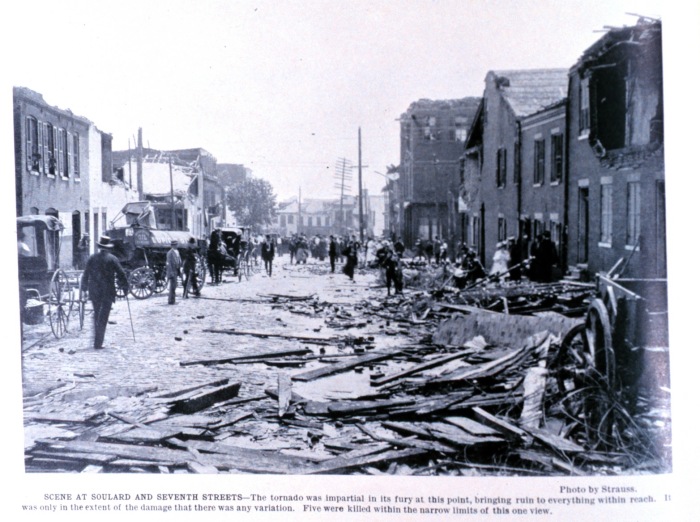 Scene at Soulard and Seventh Streets. 27 May 1896. Photo by Strauss. In Photographic Views of the Great Cyclone at St. Louis, May 27, 1896. Image available from http://www.photolib.noaa.gov/htmls/wea00260.htm.

On Wednesday, May 27, 1896, a tornado struck St. Louis, Missouri shortly after 5:00 PM. It touched down in southwest St. Louis, on Arsenal Street, and moved through Shaw's Garden, Compton Heights, Lafayette Square, and Soulard. It crossed the Mississippi River into East St. Louis, Illinois. The tornado, which became known as the Great Cyclone, killed 255 people (137 in St. Louis and 188 in East St. Louis). 311 buildings were destroyed. 7,200 buildings were severely damaged, and 1,300 additional buildings were significantly damaged. Essential public services were knocked out by the tornado.

The worst of the damage was in the Soulard neighborhood, which is the area where some of my family lived. My great-great-grandparents Carl Joseph and Christina (Nagel) Schneider and their children lived at 1804 Geyer Ave. Carl's brother John William Schneider and his family lived at 1728 Geyer Ave. My great-great-grandfather John Gersbacher lived near the neighborhood, between Soulard and the Mississippi River, at 1513 S. 3rd St. My great-grandmother Paulina Gersbacher was living with and working as a servant for August W. and Adele Schulenburg, who lived at 2822 Eads Ave., between Compton Heights and Lafayette Square. The Schneiders and Gersbachers were members of Sts. Peter and Paul Catholic Church in Soulard, which was damaged by the tornado.

The Great Cyclone of 1896.  http://tornados.slpl.org/index.html

The St. Louis Cyclone of 1896. http://www.usgennet.org/usa/mo/county/stlouis/cyclone.htm
Posted by Beth at 1:17 AM