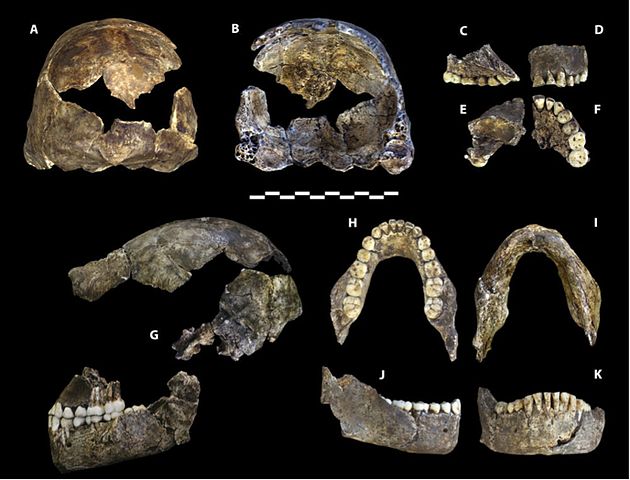 One of the cover stories on today's issue of the New York Times caught my eye this morning: "Cave Yields Addition to the Human Family Tree." I have always been interested in human evolution, so I read it eagerly.

Paleontologist Lee R. Berger and his team of scientists recovered more than 1550 fossil specimens from the Dinaledi Chamber in the Rising Star Cave near Krugersdorp, South Africa. The specimens belong to at least 15 individuals. The fossils were discovered by Rick Hunter and Steven Tucker, two members of the Speleological Exploration Club of South Africa. The two men showed pictures of the bones to geologist Pedro Boshoff, who had organized the cavers' exploration. Boshoff notified Dr. Berger of the discovery.

The narrow cave opening was challenging to enter. A team of six excavating scientists was recruited. They had to be slender enough to fit through the crack in the limestone wall. The team, called "Underground Astronauts," consisted of six women: K. Lindsay (Eaves) Hunter, Marina Elliott, Elen Feuerriegel, Alia Gurtov, Hannah Morris, and Becca Peixotto.

The bones belonged to a previously undiscovered species, which was named Homo naledi. The species was named for the Rising Star Cave; "naledi" means "star" in the Sotho language.

The fossils have no marks from predators or scavengers, and were deposited in a remote chamber of the cave. The bodies were apparently intentionally deposited there by other members of the species.

Whether the new species is directly ancestral to us or is a cousin, it is part of our family tree!