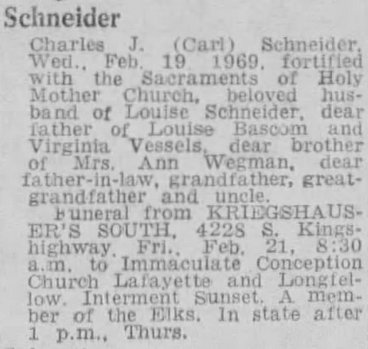 Carl J. Schneider was the son of my 2nd-great-grandparents Carl Joseph Schneider and Christina Nagel. He was born on 17 March 1885 in Remagen, Ahrweiler, Rheinland-Pfalz (Rhineland-Palatinate), Germany. He and his family emigrated in 1892, and he grew up in St. Louis, Missouri. He married Louise Scheffer on 12 June 1912 in St. Louis. They had twin daughters, Louisa Virginia and Virginia Louisa, born on 21 March 1915. He died on 19 February 1969 and was buried in Sunset Memorial Park in Affton, St. Louis County, Missouri.
Posted by Beth at 11:35 PM