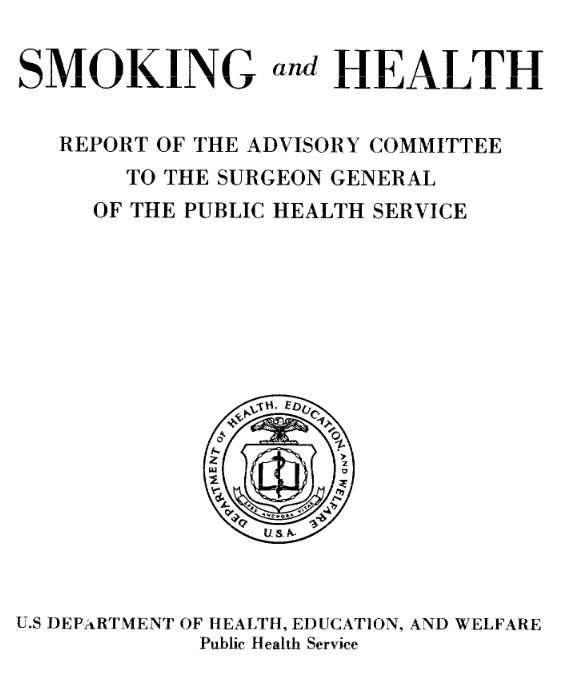 Smoking and Health: Report of the Advisory Committee to the Surgeon General of the Public Health Service. U.S. Department of Health, Education and Welfare, 1964. Available from http://profiles.nlm.nih.gov/NN/B/B/M/Q/.

On Saturday,11 January 1964, Surgeon General Luther L.Terry issued Smoking and Health: Report of the Advisory Committee to the Surgeon General of the Public Health Service. He chose a Saturday because he wanted the report to receive maximum coverage in the Sunday newspapers, and he also wanted to minimize the effect that it would have on the stock market.

My parents smoked when I was very young. I hated it. I made my mother a necklace when I was about four years old. I couldn't have been any older than five, since I remember it was when we were living in Oakland, New Jersey and we moved to Wyckoff, New Jersey mid-year when I was in kindergarten. I cut out pictures from magazines and pasted them on a shoestring. On the sides were pictures of people; none of them were smoking cigarettes. In the center was the Surgeon General's warning, which I had cut out from a cigarette ad.

My mother still has that necklace. She joined Smokenders, and told my father everything that she learned. They both quit smoking.

References
The Reports of the Surgeon General
Posted by Beth at 12:04 AM