Friend of Friends Friday: A True Account of the Sales of the Negroes Belonging to the Estate of Skelton Hardgraves Decd

Skelton Hardgrave (or Hardgraves) was the son of my 6th-great-grandparents Francis Hardgrave and  Sarah Greer. The slaves which belonged to his estate were sold on 18 December 1830. 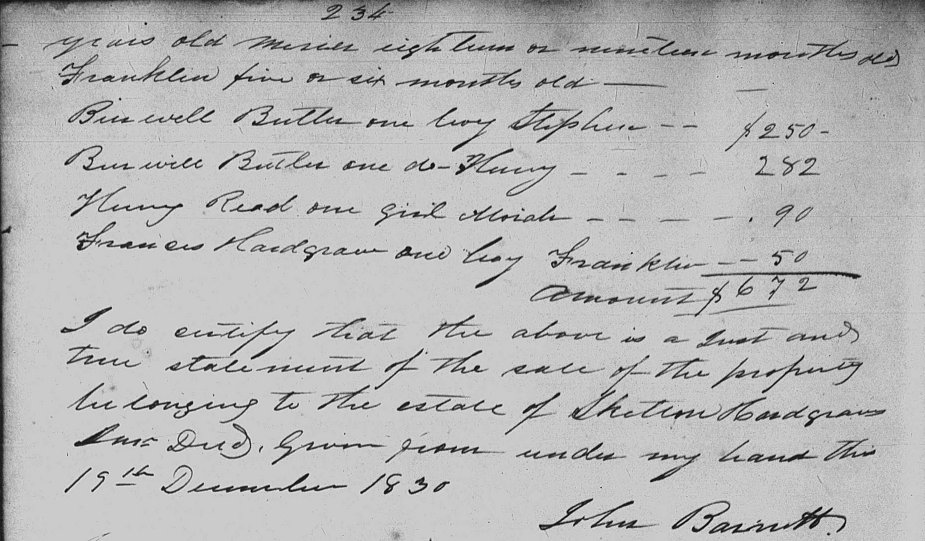 A True account of the sales of the negroes belonging to the estate of Skelton Hardgraves Decd  December 18th 1830
According to advertisement and the decree of the county court of Madison County Tennessee
I now offer for sale to the highest bidder on a credit of twelve months the purchaser giving hand and approved security for negroes thare names as follows to wit:
Stephen seven or eight years old, Henry eight or nine years old Mariah eighteen or nineteen months old Franklin five or six months old --
Burwell Butler one boy Stephen  - -   $250 -
Burwell Butler one boy Henry   - - - -   282
Henry Read one girl Mariah    -  -  -  -   90
Francis Hardgrave one boy Franklin - - 50
Amount $672
I do certify that the above is a just and true statement of the sale of the property belonging to the estate of Skelton Hardgraves Decd, given from under my hand this 19th December 1830
John Barnett
Posted by Beth at 8:47 PM