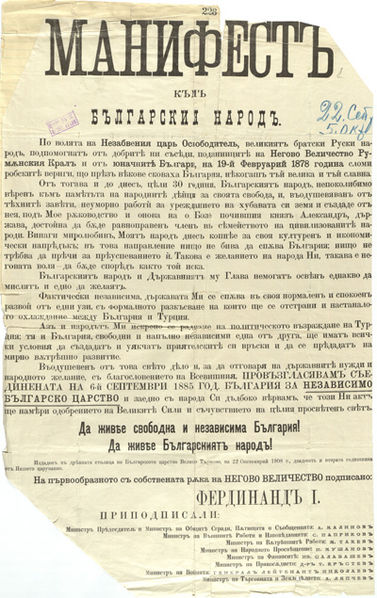 Independence Day is celebrated on September 22. Veliko Tarnovo is the center of the celebrations. This year there will be a service at Holy Forty Martyrs Church, a flag blessing ceremony at Vasil Levski National Military University, a flag-raising ceremony, public addresses by statesman and officials, concerts, chain dances, and a laser show at the medieval stronghold Tsarevets. In Sofia, events will begin at Alexander of Battenberg Square. There will be an address by the mayor of Sofia. The Sofia Brass Band will perform in front of the Monument to the Unknown Soldier.

I have Bulgarian family members; my cousin's wife is Bulgarian, and their children, my first cousins once removed, are half Bulgarian.

Email ThisBlogThis!Share to TwitterShare to FacebookShare to Pinterest
Labels: Bulgaria