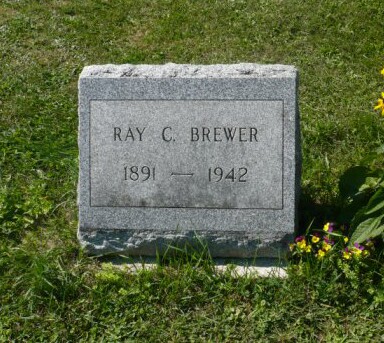 Ray Cyrus Brewer was born in December 1891 in New York. He was the son of Henry J. and Eva (Dye) Brewer. On 20 January 1917 in Otsego County, New York, he married Kathryn Berberick (the sister of John Joseph Berberick, who married my great-grandmother's sister Margaret Tarkington and Margaret's daughter Louise Margaret Gray.) They had three daughters and a son. Kathryn died in 1929, and Ray remarried in 1931, to Rena Rhea Burdick. He died in 1942 and was buried in Cedarville Cemetery in Cedarville, New York.
Posted by Beth at 11:27 PM