The 1930 United States census shows that Fritz Arthur Gilbert, the husband of my great-grandmother's sister Juliet Dahlquist, was the treasurer for a company that made artificial lakes.

The 1940 United States census shows that he was the treasurer for a real estate supply company. 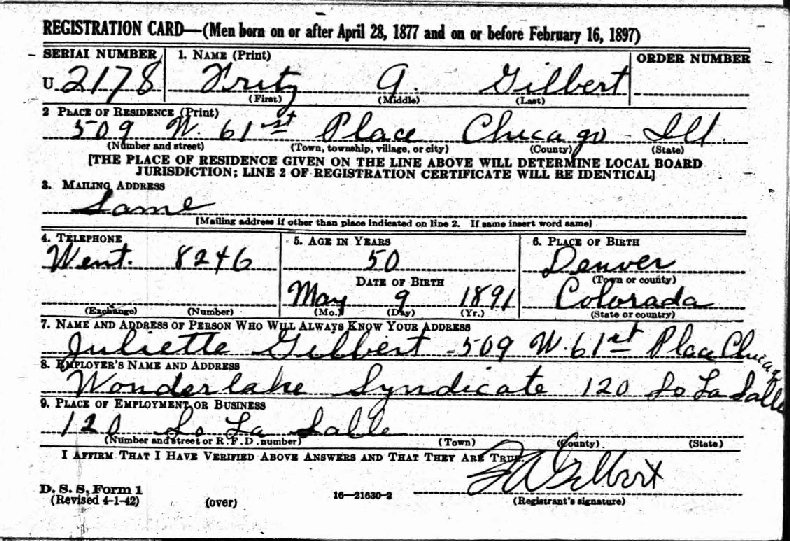 The Wonder Lake Realty Trust, or Wonder Lake Syndicate, purchased farmland in McHenry County, Illinois. In 1929, a dam was built across Nippersink Creek, and the farmland was flooded to create an artificial lake. The plan was to create a recreational community patterned after Lake Geneva, Wisconsin. Houses were build along the shores of the lake. The first subdivision opened in 1930. In 1934, 46 homes were built at Wonder Lake, and nearly 100 parcels of land were sold. In 1935, 95 homes were built, and 180 home sites were sold. In 1936, 75 houses were built, and 200 home sites were purchased. By 1953, 300,000 to 400,000 lots had been sold.

In 1963, the Wonder Lake Syndicate turned the lake over to the Master Property Owners Association, which represented the subdivisions of the community.

In 1968, Fritz Arthur Gilbert was vice president and treasurer of Wonder Lake Realty Trust. His death certificate (dated 4 March 1978) states that he was president of a real estate company.