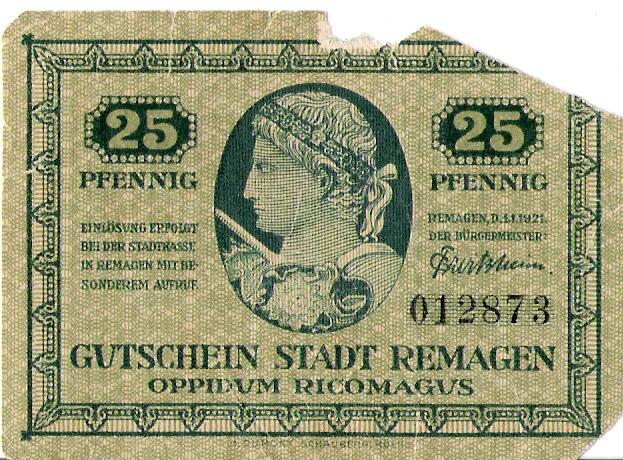 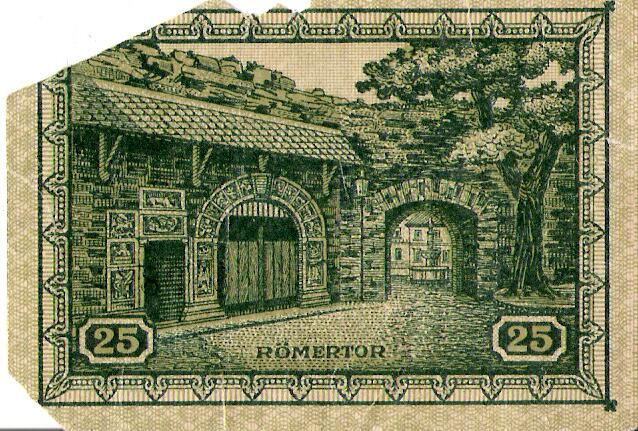 Notgeld (emergency money) is money that is issued during a time of economic crisis by an institution that is not officially sanctioned by the central government. It may be issued by municipalities or banks. During World War I and the period between World Wars I and II, it was produced in Germany and Austria. As a result of inflation after World War I began, the value of the material coins were made from was higher than the value of their denominations, and metal was needed to produce materials for the war. Coins were hoarded by many institutions. Because there was a shortage of coins, notes in small denominations were issued. The first German Notgeld was produced on 31 July 1914 and was issued by Bürgerliches Brauhaus GmbH, Bremen. 5,500 varieties of Notgeld, from 452 different places, were produced that year. The number of varieties subsequently increased. The largest number of varieties was produced in 1923: 70,000 varieties of inflationary notes from 5,849 places. Additional statistics are available on the Issues: German page of Notgeld.com and the Chicago Coin Club's Notgeld Web page.

My aunt Joan has the 25 pfennig note from Remagen, Germany pictured above; I have a scanned copy of it. According to the Remagen Stadt Set 1 page on the German Notgeld Web site, it was produced in 1921. My Schneider ancestors left Remagen in 1892. I know that my great-great-grandfather Carl Joseph Schneider returned to Remagen for a visit in 1900, but I do not know if anyone from the family ever visited at a later date. I am not sure if this note was obtained on a later visit, if it was sent by a relative or friend, or if it was purchased at a later date. Many people collect Notgeld.