When I saw that the 52 Ancestors Challenge Week 5 theme was "Plowing Through," I immediately thought of Nels A. Samuelson, the husband of my great-great-grandmother's sister Clara Matilda Borg. Nels (or Nils) was born in Indiana on 21 August 1871. He was the son of two Swedish immigrants, Carl August Samuelson and Sophia Johnson. Carl August Samuelson was a farmer, and Nels also became a farmer.

On 28 November 1900, he married Clara Matilda Borg in Porter County, Indiana. M. J. Lonner was the officiating minister. Clara's sister Malinda A. Borg married Charles August Lawrence on the same day. Clara was thirteen years older than Nels, and was 42 years old when they married. The couple never had biological children, but they raised an adopted daughter and son. The girl was born Etta Maria Carter, but was listed as Etta Samuelson, adopted, in the 1910 United States Census. The boy, Leroy G. "Roy" Johnson, had joined the family by 1920; he was listed as a lodger in the Samuelson home in the 1920 United States Census. 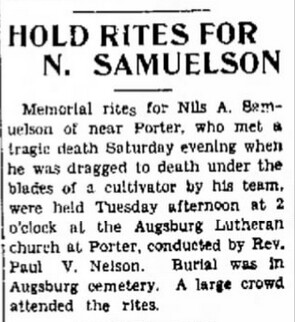