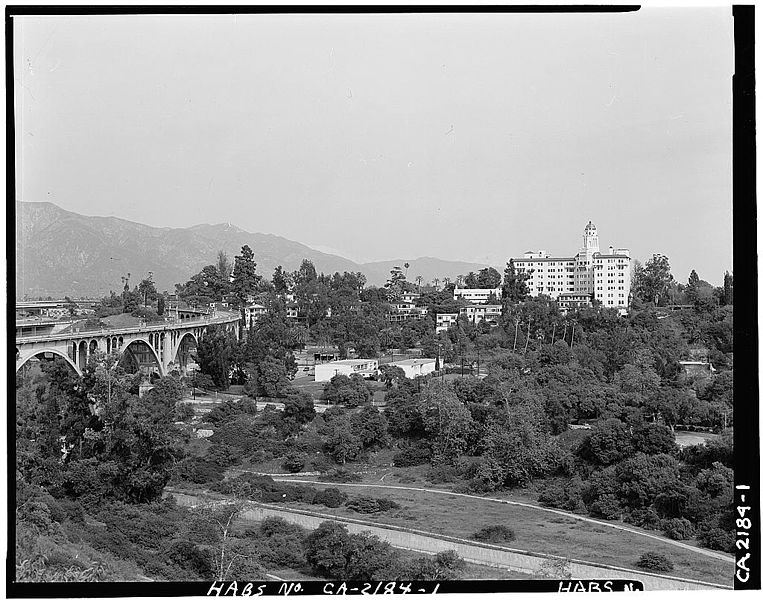 My great-grandmother's sister Augusta "Gussie" (Gersbacher) Parker worked as a waiter at hotels in Pasadena, California. The 1927 Pasadena city directory lists Gussie as a waiter at the Hotel Vista Del Arroyo.

Emma C. Bangs opened the original Vista del Arroyo Hotel in 1882. Daniel M. Linnard purchased the hotel in 1919 and commissioned the architectural firm Marston & Van Pelt to design a new two-story building in the Spanish Colonial Revival style. In 1926, H. O. Comstock purchased the hotel. He hired architect George H. Wiemeyer to redesign the hotel and add a six-story building. Bungalows were also built on the property. The dining halls, including the Sunset Room and the Spanish Room, overlooked the grounds.In 1943, the United States Department of War purchased the hotel and converted in into an army hospital. The building is now the Richard H. Chambers United States Court of Appeals.

The 1934 Pasadena city directory lists Gussie as a waiter at the Maryland Hotel.

The Maryland Hotel was located on Colorado Boulevard. It was a year-round hotel, not a seasonal hotel. The first owner, Colin Stewart, was from Maryland and named the hotel after his home state. It was later owned by Daniel M. Linnard. On 18 April 1914, the hotel was almost completely destroyed in a fire. Myron Hunt designed the new building, which opened later that year. The hotel was torn down shortly after 20 August 1937.

When Gussie filled out her application for a Social Security number on 27 November 1936, she stated that she worked for the Huntington Hotel Co.

The Huntington Hotel was originally called the Hotel Wentworth. It was built by Wentworth and designed by Charles Frederick Whittlesey in the the Spanish Colonial Revival style. The hotel opened in February 1907. There were heavy rains during the hotel's first season, so many potential guests went elsewhere, and the hotel closed at the end of the season. Henry Huntington purchased the hotel in 1911, and it was redesigned by Myron Hunt. It reopened in 1914 as the Huntington Hotel. Every evening, formal dinners were held in the Georgian Ballroom. The hotel was originally a winter resort, but in 1926 it began to stay open year-round, and an Olympic-size swimming pool was added. Stephen W. Royce later owned the hotel, and he sold it to the Sheraton Corporation in 1954. The hotel was renamed the Huntington Sheraton. The hotel closed in 1985, but reopened in 1991 as the Ritz-Carlton, Huntington Hotel. The hotel was purchased by the Langham Hospitality Group in 2008 and renamed the Langham Huntington, Pasadena.

Gussie worked as a waiter at least through 1949, but the later city directories do not list her place of employment.