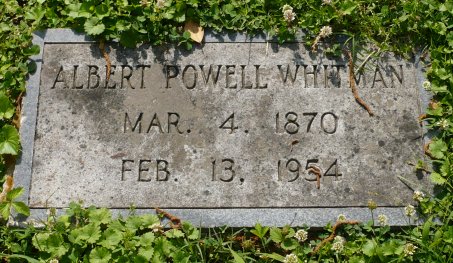 Albert Powell Whitman was born in Guntersville, Marshall County, Alabama, probably on 4 March 1871. Although his tombstone and death certificate give his birth date as 4 March 1870, he is not listed in the 1870 United States census with his parents James Phillip Whitman and Mary Gilbreath. He married Louise Amanda Tarkington, the sister of my great-great-grandfather, on 3 March 1897 in Davidson County, Tennessee. They had four children: Amanda Mary (born 5 February 1898), Finner Dupree (born 13 December 1903), Joseph Tarkington (born 31 March 1905), and Walter William (born 23 March 1908). Louise died on 13 February 1915. On 7 September 1916, Albert married Lillian Gertrude Pamplin in Williamson County, Tennessee. They had a daughter, Evelyn Lorraine (born 11 November 1917), and a stillborn son (born/died 8 October 1918). Lillian died on 10 October 1918. Albert worked as a postman for the city of Nashville. He died in Nashville on 3 February 1954 (the date on the tombstone is incorrect). On 5 February 1954, he was buried in Mount Olivet Cemetery in Nashville, section 13 lot 75.
Posted by Beth at 12:12 AM