James Mappleback, the second husband of my great-great-grandmother Catherine Elizabeth Winters and the stepfather/adoptive father of her children Kathleen (my great-grandmother) and Garfield Graham, was a glassblower. The family left Montreal, Quebec, Canada after the 1891 Census of Canada and was living in Alton, Madison County, Illinois by 1892. The Illinois Glass Company was located in Alton. James Mapplebeck may have moved to Alton with his family because he would be able to find work there as a glassblower. He is listed in the 1895-1896 Alton, Illinois city directory as a blower at the glass works.

By 1898, James Mapplebeck had left Alton, Illinois and was living in San Francisco, California. He was still working as a glassblower. His family remained in Alton. In the 1900 United States census, Garfield (using the surname Mapplebeck; he later reverted to his birth surname, Graham) is listed as an apprentice glassblower. In the 1901-1902 Alton city directory, he is listed as working at the glass company. 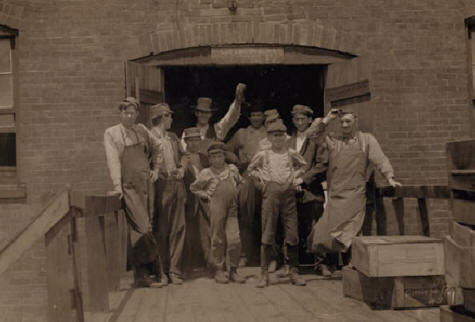 The Madison County ILGenWeb's Alton, Illinois Photos page includes photos of glass workers at the Illinois Glass Company in Alton. Although members of my family were no longer working in Alton in 1910, the photos still give me an idea of what their work lives were like.

Joe Manning has written about Joseph and Frank Dwyer and Henry Maul, who worked at the Illinois Glass Company as boys. Some of the workers at the glass company were underage. According to the 1940 United States census, the highest grade that Garfield Graham had completed was the 5th. Perhaps he was one of the underage workers at the glass company.
Posted by Beth at 1:27 AM