I have many black sheep in my family tree, and I have posted about them in the past. I have found some additional information on my great-grandfather's brother William D. Gatlin, so this week is the perfect time to share the update.

To recap, William was born on 10 December 1886 in Nashville, Tennessee. He was the third child of John William Morton Gatlin and Sarah Claire "Sadie" Dyer. His paternal grandfather William Dow Gatlin was tried for an ax murder, and his mother's half-brother Tom Cox was sentenced to death for killing a police officer (but committed suicide before he could be executed). As far as I know, William first served time in the Southern Illinois Penitentiary in Chester, Randolph County, Illinois, for committing robbery. He broke out of prison twice. He and his brother John were involved in a shooting, when a man tried to break up a fight between them and the man's gun went off. (The man lived.) He was arrested for stealing guns, ammunition, a knife, and 36 pairs of scissors from a hardware store in Bloomington, Indiana. He served time in the Indiana Reformatory and the Indiana State Prison. Not long after his release, he was sent to Joliet Prison in Joliet. Illinois, where he was shot and killed by a guard after refusing to obey orders. He died on 23 September 1919.

William's prison records from the the Indiana Reformatory and the Indiana State Prison provided more details about him, including his mug shot. 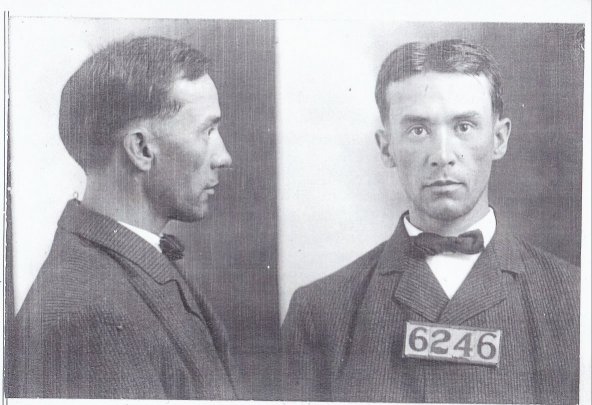 Now for the update: not long ago, I searched the Hoosier State Chronicles: Indiana's Digital Historic Newspaper Program. I found two more news items about William, which provided information about one of his escapes from prison. 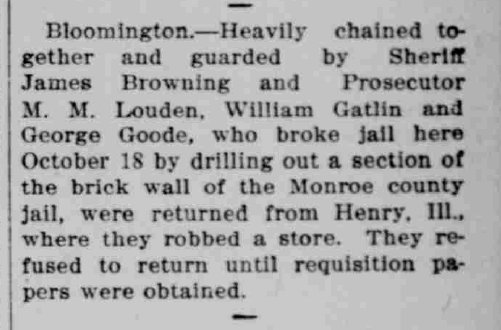 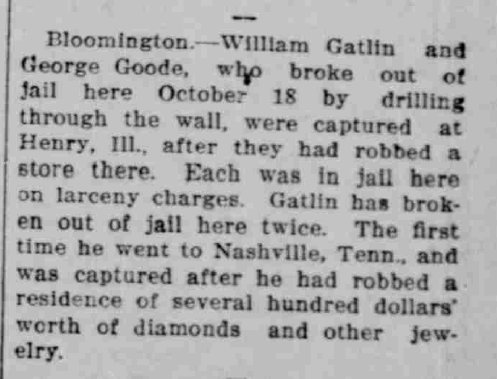 From William's Indiana prison records, I had learned that he had escaped from prison but was caught after he committed burglary in Henry, Illinois. Although these two newspaper items are brief, they add more details. It was interesting to learn that he had escaped by drilling out part of a brick wall. I also had not known that he escaped with another inmate. I had not known that he went to Nashville the first time that he escaped. Most of his family was living in Chicago by then, but his sister Anna Elizabeth Gatlin and her husband Frank Joseph Smith still lived in Nashville. His father's brother and two of his father's sisters also lived in Nashville. I hadn't known that William was a jewel thief; when he was arrested in 1912 and sent to prison, he had stolen weapons. I learned  a lot from these two brief news items. I hope to learn even more about William. Black sheep are so interesting to research!
Posted by Beth at 12:04 AM