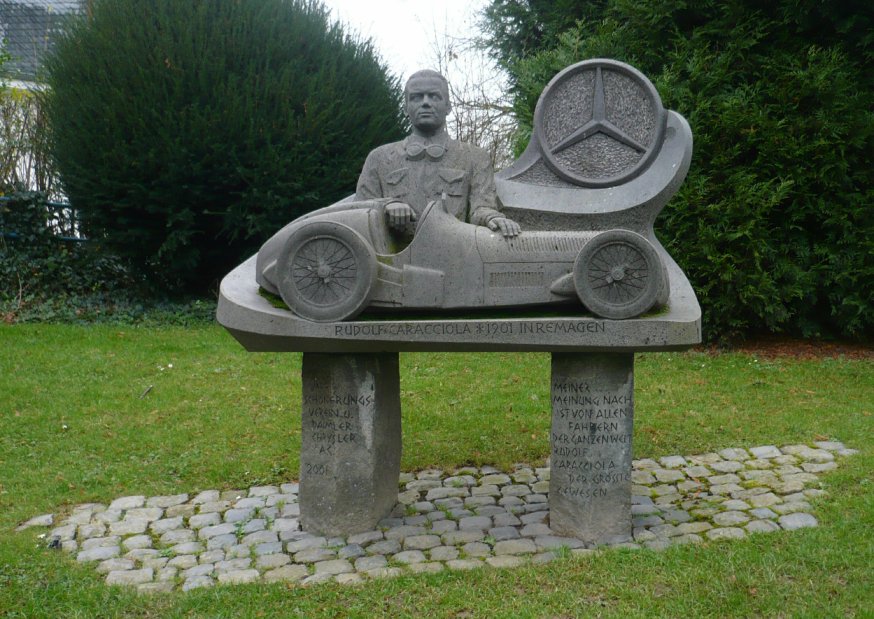 This statue of racing driver Rudolf Caracciola is located in Remagen, Kreis Ahrweiler, Rheinland-Pfalz (Rhineland-Palatinate), Germany. Remagen is his birthplace, and is also one of my ancestral towns.

Rudolf Caracciola was born on 30 January 1901. His ancestors came to Germany from Italy during the Thirty Years' War. He began driving before he was eighteen years old (the legal age). In 1922, while he was working at the Fafnir automobile factory in Aachen, he drove one of Fafnir's cars in the Automobil-Verkehrs- und Übungs-Straße (AVUS) race in Berlin, and was fourth overall. He won his next race, at the Opelbahn in Rüsselsheim. In 1923 he moved to Dresden, and won the ADAC (Allgemeiner Deutscher Automobil-Club e.V.) race. At first he continued to work for Fafnir, but he became a car salesman for Daimler later that year. He won eight races in 1925. In 1926, he won the German Grand Prix. He married Charlotte Liesen, and opened a Mercedes-Benz dealership on the Kurfürstendamm in Berlin. He finished third in the Monaco Grand Prix in 1929.

After Mercedes-Benz withdrew from racing in 1931, he raced for Alfa-Romeo. In 1933, after Alfa-Romeo withdrew from racing, he and his friend Louis Chiron formed their own team, Scuderia C.C. (Caracciola-Chiron). While practicing for the Monaco Grand Prix, he was seriously injured in an accident. In February 1934, his wife died in an avalanche while skiing.

When my great-grandfather's brother Carl (or Karl) Schneider was baptized in Remagen on 25 March 1885,  Karl Caracciola was one of the sponsors. I am not sure what the relationship was between Karl Caracciola  and Rudolf Caracciola, but they probably were related somehow.