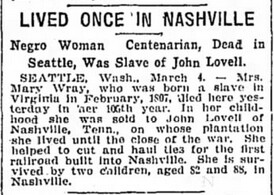 SEATTLE, Wash., March 4. – Mrs. Mary Wray, who was born a slave in Virginia in February, 1807, died here yesterday in her 106th year. In her childhood she was sold to John Lovell of Nashville, Tenn., on whose plantation she lived until the close of the war. She helped to cut and haul ties for the first railroad built into Nashville. She is survived by two children, aged 82 and 88, in Nashville.
Posted by Beth at 5:59 PM