My 3rd-great-grandmother Amanda Russell was born in Davidson County, Tennessee on 20 February 1830. She was the daughter of Sobrina Russell. She married Joseph Tarkington on 12 June 1849, at her family's home. The first of the couple's twelve children, my great-great-grandfather James William Tarkington, was born on 28 May 1850. At first they lived in Davidson County near Amanda's family, but then moved to Williamson County, probably after her mother's brother James Russell purchased land as trustee for his sister (and Amanda's mother) Sobrina Russell on 26 January 1858. Amanda inherited this land, and she and her husband Joseph sold the land on 23 May 1888. By this time, they had moved to Nashville. Joseph died in 1903, and on 18 September 1908, Amanda filed for a Confederate widow's pension. She was living with her youngest child, her daughter Louise Amanda (Tarkington) Whitman. Her claim was approved. She died on 27 January 1912 in Nashville, Tennessee and was buried at Mount Olivet Cemetery in Nashville, in Sec. 13 Lot 75. Her grave is unmarked.

Amanda's death certificate states that her parents were James Russell and Bryny Hargrave. However, that is not correct. When Joseph and Amanda sold their land in 1888, the deed stated that Amanda had inherited the land as the only child of Sobrina Russell. When that same land was purchased in 1858, James Russell purchased it as trustee for his sister Sobrina Russell. This James Russell was born about 1817, so he was too young to have been Amanda's father. I have never found a marriage record for Sobrina. Amanda, James, Sobrina, and Hannah (Hardgrave) Russell (the mother of James and Sobrina) lived near each other in 1850, and probably in 1840 as well. "Bryny" sounds like a nickname for Sobrina, and the surname given for her on Amanda's death certificate was a variant spelling of Sobrina's mother's maiden name. These sources suggest that Amanda was the illegitimate daughter of Sobrina Russell. But who was Amanda's father?

I believe that an examination of other sources reveals the identity of Amanda's father. Amanda's oldest son, my great-great-grandfather James William Tarkington, lived with James and Louisa Sawyer in 1870 and 1880. In 1880, he was listed as a grandson of the head of household. James and Louisa married on 14 December 1845, so James Tarkington could not have been the son of a child they had together. It has been suggested that Louisa (McDowell) and her first husband Asbury Tarkington were Joseph Tarkington's parents and that that is how James Tarkington was their grandson. However, Asbury and Louisa married on 5 January 1832. Since Joseph and Amanda married in 1849, I think Joseph's birth year of 1830 is correct. When Louisa Sawyer wrote her will on 28 January 1885, she left her entire estate to her husband James Sawyer, and stated that after his death, her real and personal estate would go to her grandson James W. Tarkington and his heirs. At first glance the will makes it seem as if James W. Tarkington were her biological grandson, but after a closer examination, I think the document actually suggests otherwise. James W. Tarkington was not to inherit anything until James Sawyer died. James W. Tarkington's father Joseph was still alive (James W. actually predeceased Joseph), and so were the majority of Joseph's other children. If Louisa was Joseph Tarkington's mother, she was disinheriting her son and most of her grandchildren, and only leaving an inheritance to one grandson, and even then only after the death of her husband. I think it is more likely that James W. was Louisa's step-grandson. Since James W. lived with the Sawyers for a long time (probably at least 10 years), Louisa probably came to think of him as a grandson, not a step-grandson. If she had no living descendants of her own, it is logical that she would want him to inherit her estate after her husband died. And if Amanda were James Sawyer's illegitimate child, she would not automatically be entitled to inherit from her father.

Another piece of evidence appears in the family tree in my father's baby book. Not everything is correct, but mistakes (such as one great-great-grandmother being listed with her stepfather's surname) can be clues and may have happened for a reason. Every other record of Amanda gives her surname before her marriage as Russell, but my father's baby book says that she was Amanda Sawyer. James William Tarkington died in 1894, and his widow probably passed down information about his family. She would only have known her mother-in-law Amanda by her married surname, Tarkington. She would have known the Sawyers (she and James married in 1880, and James was living with the Sawyers that year; the couple may even have lived with the Sawyers for a while after their marriage). It would make sense for her to assume that Amanda's maiden name was Sawyer.

I believe that Amanda Russell was the daughter of James Sawyer and Sobrina Russell. 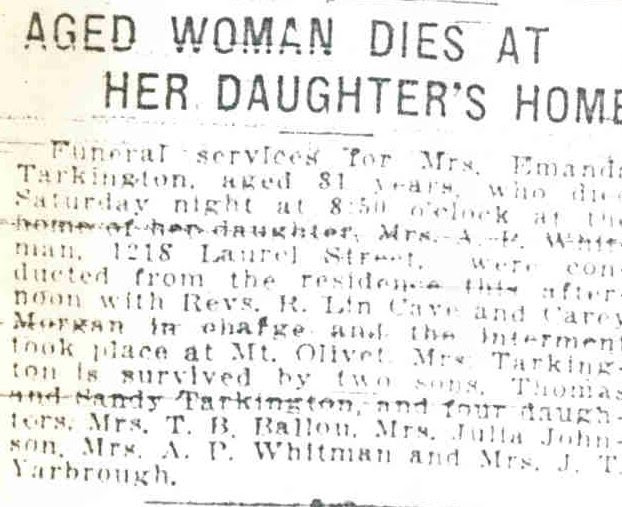 From my father's baby book. Some information is incorrect, including the first name of Amanda's husband (he was Joseph, not James). Although Amanda's maiden name was actually Russell, I believe that Sawyer was the surname of her father. 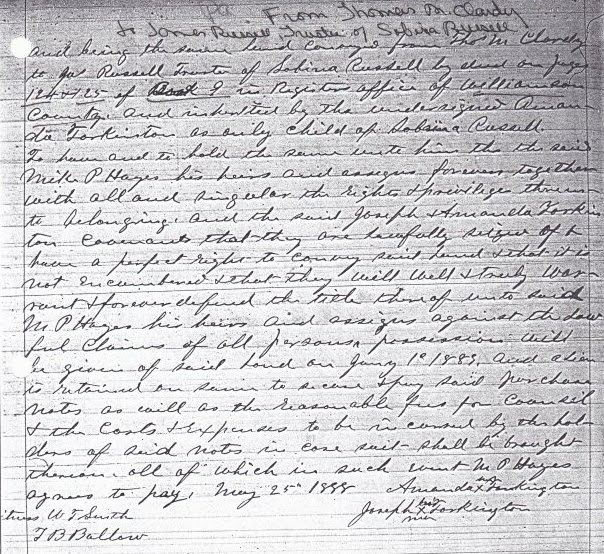 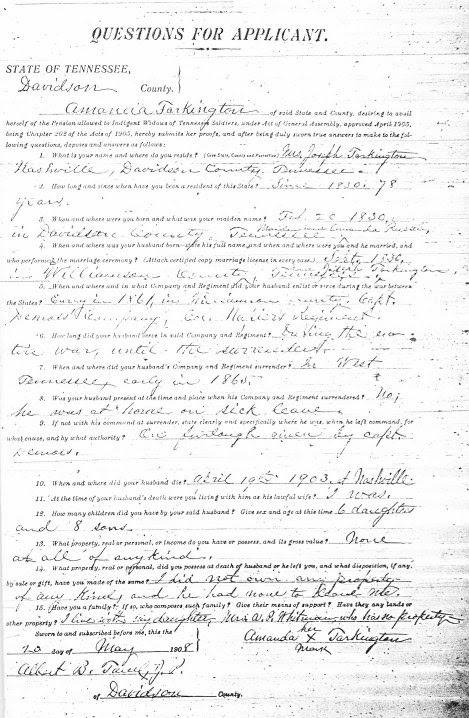