Joseph enlisted in the Confederate army on 5 December 1862. He was a private in the 10th Regiment, Tennessee Cavalry, Company D. On the company muster roll for May-June 1863, he was noted as absent sick. In Amanda (Russell) Tarkington's Confederate widow's pension application, William M. Tillett stated that Joseph Tarkington was sent home on sick leave because of asthma and pneumonia, and that Joseph was never again a well man.

Joseph was a farmer, and at times also worked as a watchman. According to Nashville city directories, he was a watchman at the Tennessee State Penitentiary in 1888, and was a watchman for the Nashville, Chattanooga and St. Louis Railway in 1895.

Joseph died at his home at 140 Hardee Street, Nashville, on 19 April 1903. According to his death certificate, he was 70 years, 5 months, and 11 days old, but that age is not consistent with his date of birth; he would have been 72 years old, not 70 years old. He was buried at Mount Olivet Cemetery in Nashville, in Sec. 13 Lot 75. His grave is unmarked.

I have not yet proven the identities of Joseph Tarkington's parents. It has been suggested that Asbury Tarkington and Louisa McDowell were his parents. Louisa's second husband was James Sawyer, and my great-great-grandfather James William Tarkington was listed in the 1880 United States Census as a grandson. Louisa's will also called him a grandson. However, Asbury and Louisa did not marry until 1832. Joseph married Amanda (born in 1830) in 1849; I think that Joseph's 1830 birth year is correct. I believe that James William Tarkington was actually the grandson of James Sawyer, who I believe to be Amanda's father. (I will discuss this in more detail in a future post.)

I have looked at the other Tarkington families in the area and have ruled out most of the possibilities. I think I know who his parents are, but it is difficult to conclusively build a case with only indirect evidence when there is a contradictory piece of evidence.

I believe that Joseph's parents were Joseph S. Tarkington and Amelia Owen, who married in Williamson County, Tennessee on 6 June 1818. They had a son, Thomas J. Tarkington, who was born about 1824. In 1830 they were living in Giles County, Tennessee. Joseph S. Tarkington married Nancy (Sanders) Theall in St. Mary Parish, Louisiana on 11 August 1833. His son Thomas did not live with them in Louisiana; I have not yet been able to determine who he lived with, but he appears to have stayed in Tennessee, since he married there in 1843. In his Southern Claims Commission approved claim, Joseph S. Tarkington stated that his only children were a daughter who died as an infant and a son who was killed at the Battle of Buena Vista in Mexico (Thomas). However, I believe that he lied so that his claim would be approved. He may have thought that his claim would not be approved if he admitted that his son had been in the Confederate army. He had already admitted that he had heard that his half-brother was in the Confederate army, but he added that he had not seen him in 25 years. He did not raise Thomas; if Joseph was his son, he did not raise Joseph either. He and Joseph share a given name. One of Joseph's sons was named Thomas. William M. Tillett, who gave a statement in support of Amanda (Russell) Tarkington's Confederate widow's pension application, was the grandson of Sarah (Tarkington) Tillett. Sarah was the daughter of William Tarkington, a cousin of Joseph S. Tarkington. William Tarkington had been Amelia Owen's guardian. William M. Tillett was present at Joseph and Amanda's wedding and he said that he had known Joseph for practically Joseph's entire life. William Tillett was slightly older than Joseph. If Joseph had been born in Giles County, Tennessee and moved to Williamson County as a very young child, it would explain why William Tillett said "his entire life, practically", not "his entire life". Joseph Tarkington's marriage bond is another piece of evidence: the bondsman was R. O. Owen.

People may lie if they have something to gain financially. I hope to eventually prove that Joseph S. Tarkington lied and that my Joseph was his son. I believe that the indirect evidence supports my theory. 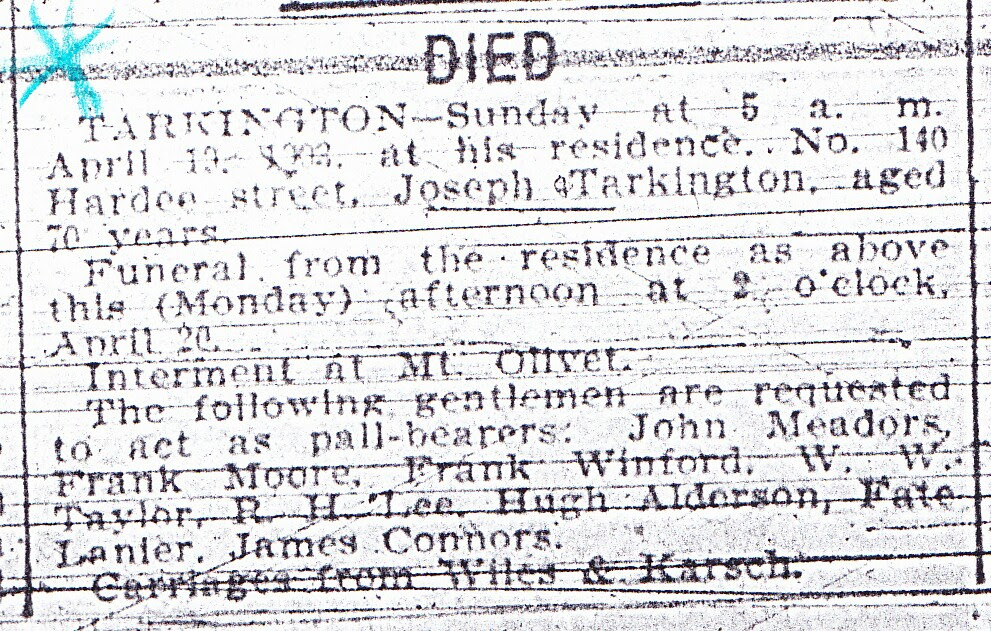