My 5th-great-grandfather Andrew Russell is one of my brick walls. I do not know when or where he was born, or who his parents were. Some online family trees state that he was born in 1778 in North Carolina, but I have never seen a source for this information. There were men named Andrew Russell in Augusta County, Virginia, where my Andrew Russell's wife's parents were from; I suspect that he may be related to them.

Andrew Russell married Hannah Hardgrave on 28 June 1799 in Lincoln County, Kentucky. In 1800, he lived in Pulaski County, Kentucky, which had been created from parts of Lincoln and Green Counties in December 1798.

He was one of the commissioners that helped to plan the town of Somerset (the county seat of Pulaski County) and arrange the location of public buildings such as the courthouse, jail, and stocks. (Pulaski County Fact Book II: Chapter 2: The Founding and Growth of Somerset.) 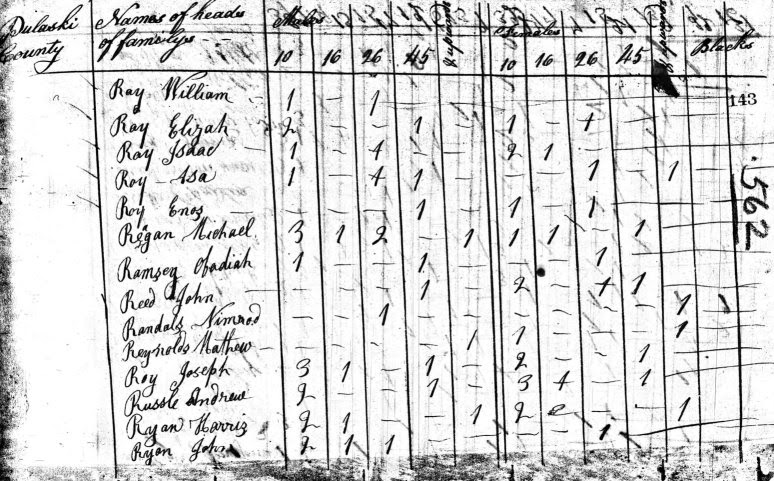 Andrew was a private in Tunstall Quarles' Company of Infantry, 2nd Regiment Kentucky Volunteer Militia during the War of 1812. His regiment constructed Fort Jennings in Ohio and remained there on garrison duty. They later headed north up to Put-in-Bay, Ohio. They were sent back to Cincinnati and discharged in 1813. The 2nd Regiment Kentucky Volunteer Militia Reenactment Group's unit history provides more information on the regiment's activities.

Report of the Adjutant General of the State of Kentucky. Soldiers of the War of 1812. Printed by authority of the legislature of Kentucky. Frankfort, KY: E. Polk Johnson, 1891. Available from Internet Archive.

In the 1820 United States census, Andrew's wife Hannah was enumerated as head of household in Davidson County, Tennessee. Andrew may have died by 1820. I have found no further record of him.

This year I kept my resolution to obtain Andrew Russell's military records from the National Archives and Records Administration. In the coming year, I resolve to obtain land records. According to a Rootsweb family tree page for James Matthews (who rented land from Andrew Russell), Andrew Russell received two certificates for 100 and 300 acres of land on Pitman's Creek in June 1801. According to note 10, this information came from Pulaski County Order Books 1 and 2.

I will also take another look at the microfilmed Pulaski County, Kentucky tax lists at my local Family History Center. I made digital copies of the relevant pages, but some of the microfilm was very hard to read. Some of the copies are difficult to read; those pages might be a little easier to read if I go back to the microfilm. Fortunately some images, like the one below, are legible.