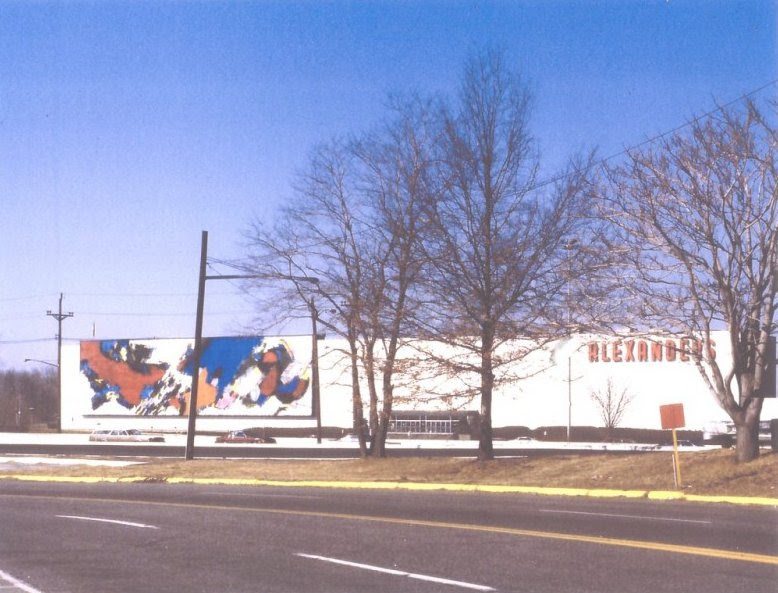 In the newspaper this week, I read that the Alexander's mural, which had been in storage in the Department of Public Works garage in Carlstadt, New Jersey, is being moved to the Art Factory in Paterson, New Jersey.

The painter of the mural, Stefan Knapp, was born in Biłgoraj, Poland in 1921. He was sent to a gulag in Siberia after the Soviet Union occupied Lwów (now Lviv, Ukraine), where he was attending Lwów Polytechnic, and murdered his father. After he was released in 1942, he joined the air force and was sent to Great Britain. After the end of World War II, he remained in England.

George Farkas, the founder of the department store chain Alexander's, commissioned Stefan Knapp to paint a mural for the Alexander's in Paramus, New Jersey. The colorful abstract mural was painted on steel, glass, and enamel. It was composed of 280 panels, measured 200 feet x 50 feet, and weighed 250 tons. It was completed in 1961. At that time, it was the largest mural in the world. It may still be the largest.

Alexander's went out of business in 1992. The mural remained on the closed Paramus store until 1996, when the store was demolished. The mural was saved from demolition, and in 1998, it was donated to the Bergen Museum of Art and Science. It was moved to the Carlstadt Department of Public Works garage until a place to display it was found. Last year the town of Carlstadt decided that the space was needed, so a new location for the mural needed to be found. The Art Factory agreed to transport and display the mural, but the Bergen Museum of Art and Science would retain ownership. The original plan was for the entire mural to be transported, but Carlstadt Mayor William Roseman decided to keep more than 20 pieces of the mural in order to ensure that it was not sold.

The mural became a landmark in Bergen County, New Jersey. People saw different things in the abstract work. As a child, whenever I was in a car and we drove past the mural, I always insisted that it was a map of the world. Not everyone agreed. I couldn't understand why, because it seemed obvious to me! Apparently I wasn't the only one who saw that: David Garsia, the general manager of the Art Factory, thought that the painting was "an abstraction of Earth" ("Paramus Alexander's Mural to Be Resurrected in Paterson). However, he is no longer sure that he still thinks that. Paramus Mayor Rich La Barberia said that he saw a parrot. ("Tug of War Over New Jersey Icon.") The band Real Estate used the mural as the cover art for their album Atlas. (Based on the title of the album, I would say that the band agreed with my interpretation!) The Bergen County newspaper The Record's online shop sells a jigsaw puzzle of the mural.

Not everyone liked the mural. The Record's columnist Mike Kelly once called it "a monstrosity." ("Then & Now: The Alexander's Mural.")

The mural will be showcased at the Art Factory's 7th annual ArtWalk on June 13 and 14. It will not be reassembled; 4 feet x 8 feet panels will be displayed.